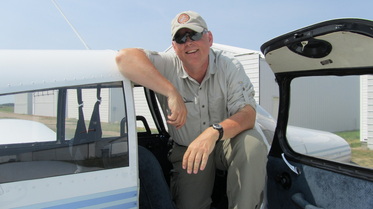 
I grew up on our family's dairy farm in Ontario.  After high school I moved to Saskatchewan to play football with the Regina Rams under Coach Gordon Currie. I liked it so much in Saskatchewan I decided to stay and wound up at the University of Regina where I graduated with a Bachelor of Education Degree. After teaching in rural Saskatchewan for a few years, I moved to Saskatoon where I now live and work.

I was a high school teacher and coach for 30 years. I joined the staff at Walter Murray Collegiate in 2005. Primarily a History teacher I also taught physical education, economics, law and psychology. I retired from full time teaching in June of 2018 but I have continued to teach that one class at Walter Murray. One of my favourite classes - AVIATION STUDIES - where I get to teach high school students how to build and fly airplanes! How cool is that!

From as young as I can remember I have always wanted to fly. In 2004, I decided that I had to finish what I started when I was 17, so I went back to flying and earned my Private Pilot’s license. These days I also teach the Private Pilot Ground School at Mitchinson Flight Centre in Saskatoon.

Not only did I earn my license in 2004, but my wife earned hers at the same time! We bought an airplane together and now we have flown our Piper Cherokee all over Saskatchewan, Canada and the United States. In 2016 was honoured and excited to be elected to the Canadian Owners and Pilots Association (COPA) National Board of Directors for Saskatchewan. I am still a member of COPA Flight #10, a member of the Recreational Aircraft Association (RAA) and a member of the Hub City Radio Control Club. 2020 will mark my 15th and FINAL YEAR of teaching Aviation Studies at good ole' WMCI.
And it's still the coolest class in the school!